skip to main | skip to sidebar

HOW TO ARGUE WITH A TRUMP SUPPORTER

Donald Trump got a huge number of votes.  Those who disagree with him have to concede at least this.  There is a train of thought within my own social media circles that his win was inexplicable in a reasonable world; that it is an example of something evil happening; that those who voted for him are, in all probability, missing something psychologically.

I would like to argue that this response is of itself likely to enhance Donald Trump's prospects.  And I would like to base my argument on simple human relations.

THE POLITICS OF DISAGREEMENT
Let's say you disagree with a friend.  What is your best strategy for persuading them that they may be mistaken?  Maybe not the usual response of Trump-haters.  Maybe don't:

1. Roll your eyes
2. Think of something rude to say about them
3. Explain that only a fool would share their views
4. Start to diagnose them as evil, a monster, or a person wth a disorder

1. Rolling your eyes is an indication that you have lost your patience with the other person
2. Saying rude things about someone is a form of bullying
3. Calling people foolish is an attack on their person and not their ideas
4. Dismissing someone as disordered is acknowledging that you are unable to understand them or engage with them on equal terms

I am suggesting that the typical response anti-Trump people offer demonstrates impatience, bullying, a willingness to attack individuals, and an inability to engage in a friendly way with other people's ideas.

Many may say that this is something they observe in the Trump camp; but I wonder why they feel this excuses the same behaviour in the anti-Trump camp.  After all, two wrongs don't make a right.

WHY DISMISSING PEOPLE WON'T PERSUADE THEM
The above behaviours are excellent ways of polarising another person against your views.  It creates the same battle that happens in adolescence: it makes someone desperate to prove their ideological independence from you.

So by all means carry on behaving in the same way, if you want to turn Trump sympathisers into adamant Trump supporters.  By using dismissive and insulting behaviour, you are likely to avoid any sincere engagement between sides.  This is great if you want to contribute to the polarisation of society, its division into two sides that don't understand each other well.

A MORE PATIENT WAY OF DISAGREEING
Instead, it's interesting to try some of the tactics that you think might work on yourself.  Thinking back to the times others have, over time, persuaded you towards their approach to life, what did you notice about their style?  Did they lose patience, insult you, and treat you as a fool?  Probably not.  When I performed the same mental exercise, I came up with a few things my most respected persuaders (i.e. those who influence me for the better) do:

1. Instead of rolling their eyes, they look at me attentively.  They give me their time and attention.
2. Instead of being rude, they are complimentary and courteous.
3. Instead of criticising my person, they discuss ideas with me in the gentlest of ways.
4. Instead of dismissing me, they get to know me on equal terms.

So, whenever I want to persuade someone, perhaps I am better off being attentive, polite, gentle and fair.

UNDERSTANDING YOUR POLITICAL OPPONENT
This might involve making the effort to understand the other person's world from the inside.  Attend their political rallies.  Understand some of the human drivers that energise their views.  Above all, appreciate that there may be hidden virtue in among their beliefs.  We tend to treat opposing ideologies as unfailingly wrong.  It is easier for our brains to process that way.  But that sort of polarised view of true and false is unlikely to help you understand a spectrum of ideas with subtlety.

This sounds great in theory, but I would like to spell out how it could look in practice.  It may make you uncomfortable.

UNDERSTANDING THE POLITICAL POLES
Here are some examples of comments which may show attentiveness, politeness, gentleness and fairness.

In each case, the person speaking is not, in the first instance, agreeing with the other person.  They are, though, increasing the possible field of discussion.  That is how, in ordinary conversation, you get on with people: you appreciate an element of their world, thereby increasing the overlapping territory.  Graphically, it looks like this: 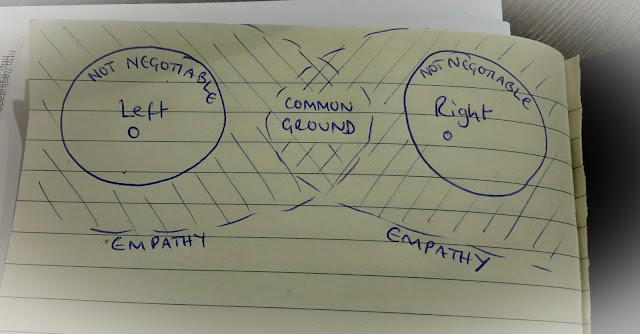 WHY THIS WORKS
The extension of empathy works because it increases the common ground available on which both people can speak.  It involves an extension of each other's minds so that each person is more inclined, and better able, to see how life might look from the other's point of view.

NON-NEGOTIABLES
A strange magic happens when empathy is extended.  Non-negotiables start to evaporate as trust builds.  But first, each side must learn to speak in a way that reduces polarisation, and increases common ground, making it attractive and habitable.

SOMETHING TO TRY
So try it, next time you find yourself boiling with rage over the statements of a political opponent.  Find it in yourself to explore their world, and appreciate it.  That way, you are less likely to polarise them, and more likely to soften both them, and yourself, making future communication and compromise so much easier.

SUMMARY
After Donald Trump's win in the US, many on the left became quite rude about him and his supporters.  This kind of communication is quite likely to make both sides firmer, not softer, in their mutual convictions and sense of separation from a perceived opposition.  It might be better to apply a bit of psychology, and extend a hand of empathy, showing that you really do see the other side of the argument.  There will be more common ground to talk on, and instead of insulting each other, we can negotiate, and even persuade and be persuaded, with greater subtlety and understanding.

Posted by Eddie Chauncy at 3:47 PM